Hi Table View Methodist Family, First of all: 💘 Happy Valentine's Day 💖 Know that you are loved above all by God who knows you in...

Does the Bible say that Christians have a right and responsibility to physically punish their children?

There is a saying of Ahiqar, a sage from Assyria that is often misunderstood to come from the Bible; Ahiqar says that to "spare the rod is to spoil the child."  The Assyrians captured Israel and took the people into slavery in 722 and 724 BCE; this marked the end of the region of the Northern tribes which in the time of Jesus were known as Sumeria; the region from which the Samaritans came.

There is a similar saying in Proverbs; Proverbs 13:24 -

24 He who spares the rod hates his son, but he who loves him is careful to discipline him.

Many argue that this means that Christians should be allowed to practice corporal punishment but in a ruling of the Supreme Court this past week Justice Mogeong Mogeong ruled that spanking crossed the line of violence:


“The right to be free from all forms of violence or to be treated with dignity speaks quite forcefully against the preservation of the common law defence of reasonable and moderate parental chastisement...”

Jesus clearly teaches us to resolve our conflicts in non-violent ways:


If someone strikes you on the right cheek, turn to him the other also. - Matthew 5:39

Through his example we learn that we can become disciplined by following an example rather than by being threatened with violence and retribution.  Discipline or self-control is in fact a fruit of the Holy Spirit and of knowing the love of God:


22 But the fruit of the Spirit is love, joy, peace, patience, kindness, goodness, faithfulness, gentleness and self-control. - Galatians 5:22-23

In a violent world we are called to be people of peace; and I believe that as Christians we should celebrate this ruling of the constitutional court that will protect children from violence and abuse.

But God created each of us as very unique; we each have different needs and different struggles.  If we take the time to understand each other - especially our children; we might find ways to help them to be the people we know they can be.

I often wish that my kids came with an instruction book but they didn't.  At times I've been really bad at disciplining them; sometimes too strict and sometimes too soft.  Some of the strategies I've tried have not been helpful at all.  I'm still working on it.

As a minister I'd like to say that even though there are Christian groups that seem quite enraged by the ruling that we shouldn't physically punish our children I would like to stand on the side of those who say yes; this is right.  It is not the easiest route; but I've too often seen where violence ends and I believe that Jesus has shown us a better way.  As parents and grandparents, uncles, aunts and friends I think we should work out more positive ways to help our kids.

Recently Heather (my wife) went on a 'Peace Discipline' course at school.  The non-violent and helpful strategies and ways of working with our kids that she learnt has helped us a lot.  Let's help each other on this journey; I think Jesus would be pleased.

I look forward to worshipping with you at 845am and 11am this Sunday.

Get Angry, but don't forget the Fun Fete on Saturday :) 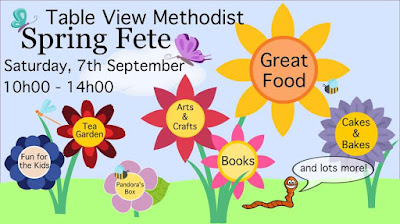 Psalm 137
By the rivers of Babylon we sat and wept
when we remembered Zion.
2 There on the poplars
we hung our harps,
3 for there our captors asked us for songs,
our tormentors demanded songs of joy;
they said, “Sing us one of the songs of Zion!”
4 How can we sing the songs of the Lord
while in a foreign land?

Jesus said: “Blessed are those who mourn; for they will be comforted.” - Matthew 5:4
This past week the media and the march against women abuse; the tragic rape and murder of Uyinene Mrwetyana have reminded us of the horrific war on women’s bodies that is going on in South Africa at the moment.  We should Mourn; which reminds me of the Kübler-Ross model of 5 stages of grief: 1. Denial and isolation; 2. Anger; 3. Bargaining; 4. Depression; 5. Acceptance.
I am not suggesting that we move from Denial and Isolation to Acceptance; but I think we need to recognize that we’ve been living in ‘Denial and Isolation.’ Right now we are seeing and we are being awakened to Anger; the need to say ENOUGH!  But too often we move on from Anger into Bargaining and on to Depressing Acceptance…  The politicians rush to go viral on social media and placate the people.  Something needs to be done.
One of the Scriptures for this Sunday is Jeremiah 18; Jeremiah is sent to the potter’s house to see how clay is moulded.  This potter is more patient than I am; simply reshaping the imperfect pieces into something better.  I would crunch up the clay and throw it on the ground…  God gets angry too; the NRSV makes it sound quite sinister:
Thus says the Lord: Look, I am a potter shaping evil against you and devising a plan against you...
- Jeremiah 18:11
We are reminded to make a change.  As a man it is not time for me to say or even to think - “But its not me…”  It is time to listen to women; and to ask God in the words of the Psalmist:
Search me, O God, and know my heart;
test me and know my thoughts.
See if there is any wicked way in me,
- Psalm 139:23-24
Let us move from anger to change.
God bless, Gus.

I'm relieved to see some leaves budding on my pruned back grape vine.  What season are you in?

Lord I don't pay attention to my roots; they don't drink deep enough from your stream of life.  Help me to dig deeper.

"11 Now then, tell the people of Judah and of Jerusalem that I am making plans against them and getting ready to punish them. Tell them to stop living sinful lives—to change their ways and the things they are doing." - Jeremiah 18:11.  I can imagine the potter getting really angry with the clay that won't co-operate and throwing it down to grab a new lump to work with.  As we respond to evil in the world there is a time for anger - but there is also a time for rebuilding.

Lord as you lovingly created me help me to recognize your purpose in all that I am.

This is one whole letter in the New Testament; Paul writing to Philemon to ask for the release of Onesimus.  How do we advocate for other members of the body of Christ?

Lord show me where I can speak up to make a difference for others.

How do we let go of the things that we have in order to follow Jesus more freely and fully?

All to Jesus I surrender all to him I freely give, I will ever love and trust him, in his presence daily live.

"...there will be more joy in heaven over one sinner who repents than over ninety-nine respectable people who do not need to repent." (Verse 7)  I love that each of us has the power to start a party in heaven.

Teach me to choose your will as daily I repent of my own and learn that your will is best and will - in the power of the Spirit become my own.

Letter from our Presiding Bishop

A Call to Prayer to end Violence
I will make peace your governor and well-being your ruler. No longer will violence be heard in your land, nor ruin or destruction within your borders, but you will call your walls Salvation and your gates Praise. Isa. 60:17-18 (NIV)
The Methodist Church of Southern Africa condemns the despicable acts of violence and looting being perpetrated mainly against nationals of other African countries by criminal elements in South Africa. We call on the criminal justice system to bring those guilty of these wanton acts of violence and criminality to book.
The Presiding Bishop, Rev Ziphozihe Siwa, is also calling for all congregations in all services to observe a moment of silence and prayer on Sunday 8 September 2019 for the end to the senseless femicide in South Africa and the broader Connexion. Enough is enough and serious action needs to be taken against the perpetrators of unbridled violence against women and children.
We, as men, confess and lament the fear, hurt, pain and grief that we are tragically responsible for which have unfortunately become a familiar but unacceptable occurrence in the lives of South African women and girls. We call upon the South African government and all civic organisations to come together to formulate broader strategies to find common ground between the sexes.
Part of a liturgy from the Central Synod (Liturgy for Prayers to end Violence against Women) is attached below to use and adapt to your context.
A Litany of Lament
Hear us, Lord Jesus Christ,
when we cry to you for all the women and girls
who are victims of violence.
Hear us, Lord Jesus Christ,
for they are stripped and beaten as you were stripped and beaten, they are humiliated and used as you were betrayed and shamed. For the beaten girls and the battered women,
blamed and bruised by angry men,
we cry out to you: bring justice!